Marie Stirling, a Specialist Diabetes Podiatrist at Dr Gray’s Hospital in Elgin, was the proud winner of the Cosyfeet Podiatry Award 2016. She used her £1000 award money to fund a pilot study examining the practical considerations of selecting a TCC method to use in clinic. She was motivated by a desire to inform decision-making by NHS Grampian about the use and methods of TCC, thereby achieving the best possible outcomes for patients who require greater offloading than the removable devices which are readily available.

Diabetic foot ulceration is the most common cause of amputation in the UK, with over 169 amputations carried out per week.1 Individuals with a diabetic foot ulcer (DFU) have an increased risk of premature death, myocardial infarction and fatal stroke,2 therefore it is a serious and costly complication of diabetes, which must be managed effectively.3

Total Contact Casting (TCC) is the recommended ‘gold standard’ treatment to off-load DFUs.4,5 Patients with unilateral plantar ulcers treated by a TCC, can have their healing time reduced to a mean of 6 weeks.6 The cast redistributes peak plantar pressure to the cast wall, reduces shear and restricts ankle motion, provides optimal off-loading,7 and being irremovable by the patient, it ensures constant use.8

TCC it is underutilised due to a variety of factors such as the fear of causing complications, and the perceived complex application process.9 Evidence from literature, however, cites TCC as a safe and effective method when applied to appropriate patients within a multi-disciplinary setting.10 It is essential that practitioners applying a cast are fully trained and experienced.11

The TCC has been established since the 1960s as a treatment for off-loading plantar ulceration.12 Over the years, materials have improved significantly, but the basic principles of treatment still apply.

A layer of stockinette is applied from the foot to above the knee, felt covers the bony prominences, wadding bandage is applied interdigitally, and extends to the foot and leg. The casting material (e.g. Delta-Cast® Conformable) is then applied to the foot, extending to below the knee, with the ankle maintained at 90 degrees. Finally, a plaster sandal is fitted. 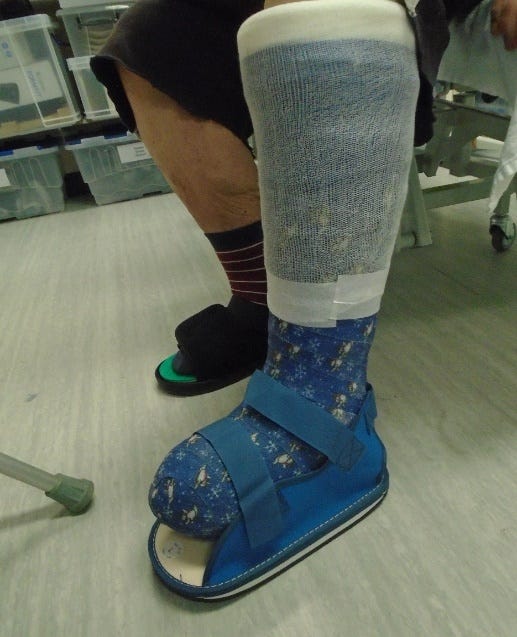 The more recent development of the TCC-EZ® device aims to simplify the application of a TCC with the materials supplied in kit form.

The patient should ideally lie prone for the application of the cast, which is rolled onto the foot and leg. This ensures an optimal fit and makes it easier to maintain the ankle at 90 degrees. The TCC-EZ® boot is then fitted. 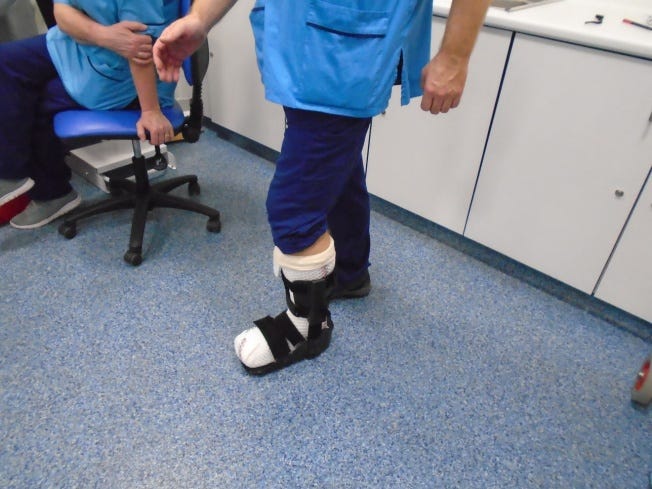 A comparison of Traditional Total Contact Casting and the TCC-EZ® device, aimed at identifying the advantages and disadvantages of using each method in practice. Consideration was given to cost, complications, ease of use, application time and patient satisfaction.

Foot ulcers were assessed and documented (including digital images), debrided and appropriately dressed according to wound status.

Patients were supplied with written information, should an emergency arise out of hours. The initial cast was removed after 48 hours to check for clinical signs of DVT, infection or friction tissue damage following any reduction in oedema. Casts were then re-applied weekly and application times were recorded. At the end of the study each patient was given an evaluation questionnaire to complete. 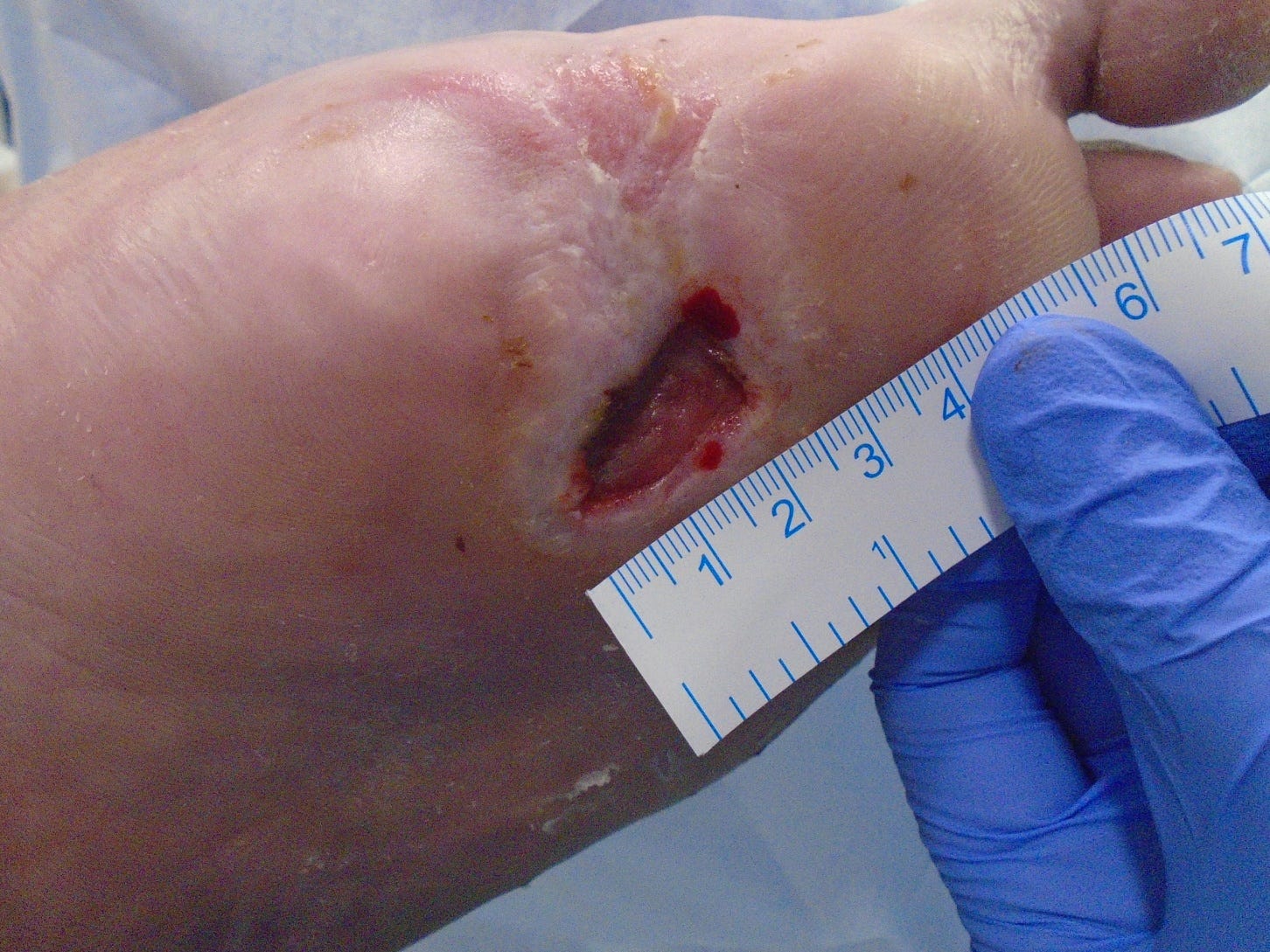 Prior to first cast

The first patient presented with a plantar ulcer following amputation of his left 1st toe and metatarsal, which had been present for 2 years. The wound measured 2 x 1cm with depth of 0.3cm.

The patient had a history of not attending his Podiatry and Practice Nurse appointments, but became motivated after adopting a healthy lifestyle, which resulted in significant weight loss.

He agreed to casting treatment and committed to attend all appointments. Within 48 hours of the application of the initial cast, the ulcer had reduced in diameter by 3mm, and depth decreased by 1mm. The cast was then applied weekly.

The ulcer continued to improve, however after 3 weeks, the cast had rubbed over the dorsal and apex of the second toe, causing additional ulceration. Consideration was given at this point to stop casting, however the wounds were non-infected, and caused by rubbing, therefore the decision was made to trial deflective felt to protect the toe whilst in the cast. The areas were dressed, deflective felt applied and the patient was re-casted. The patient was reviewed within 48 hours to check for infection. Within 48 hours the wounds had significantly improved. Deflective felt under the cast was so successful, it was continued to be used under the weekly cast.

After 6 weeks of casting the additional lesions had resolved and the original plantar ulcer was almost healed. Due to the unavailability of trained staff to apply a cast over the Christmas holidays, casting was stopped temporarily, with the intention to recast in 2 weeks.

The patient, however, was pleased with the improvement in his wound and made the decision to discontinue with the cast. Full healing was achieved within 8 weeks of removal of the last cast. 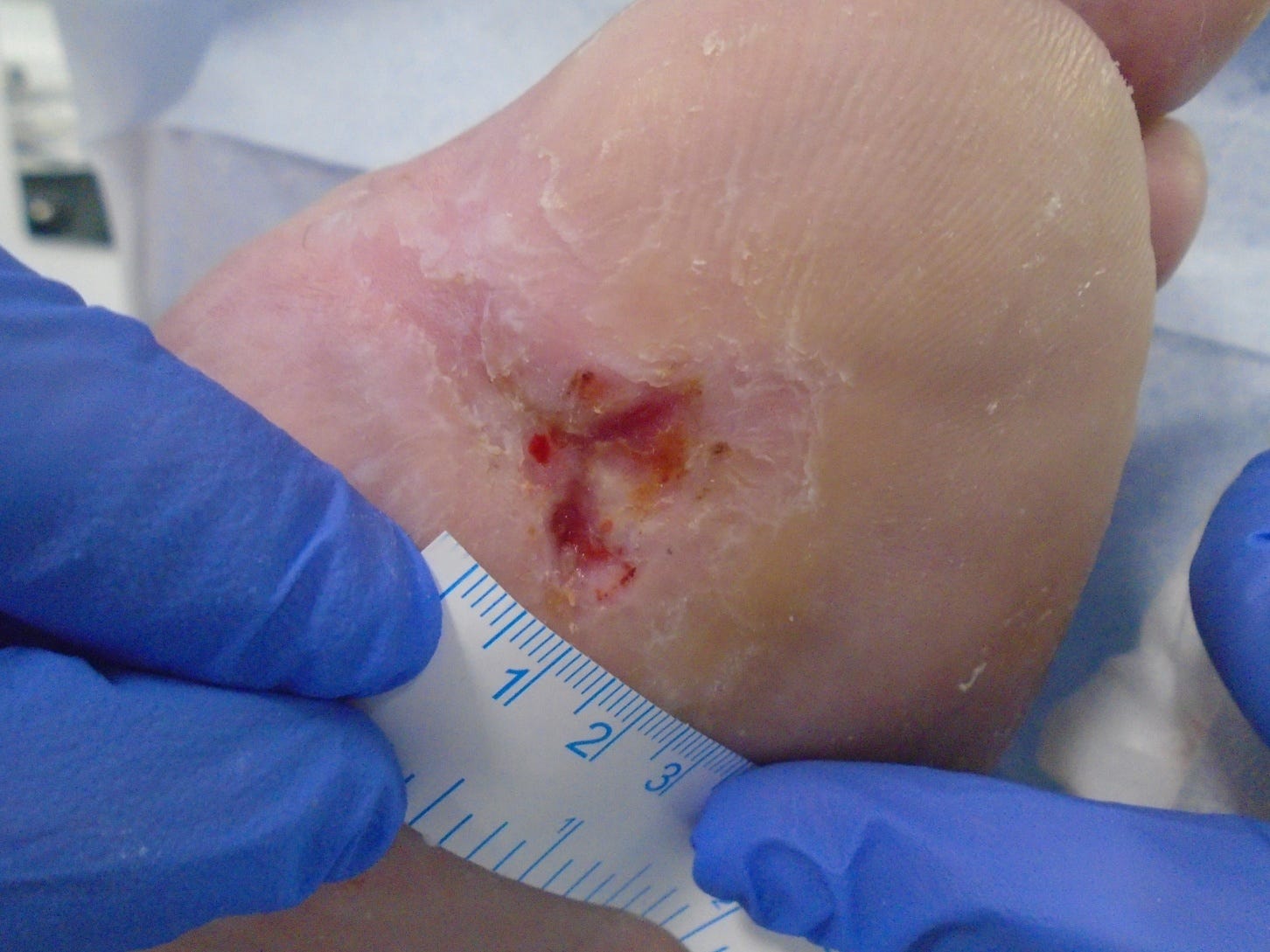 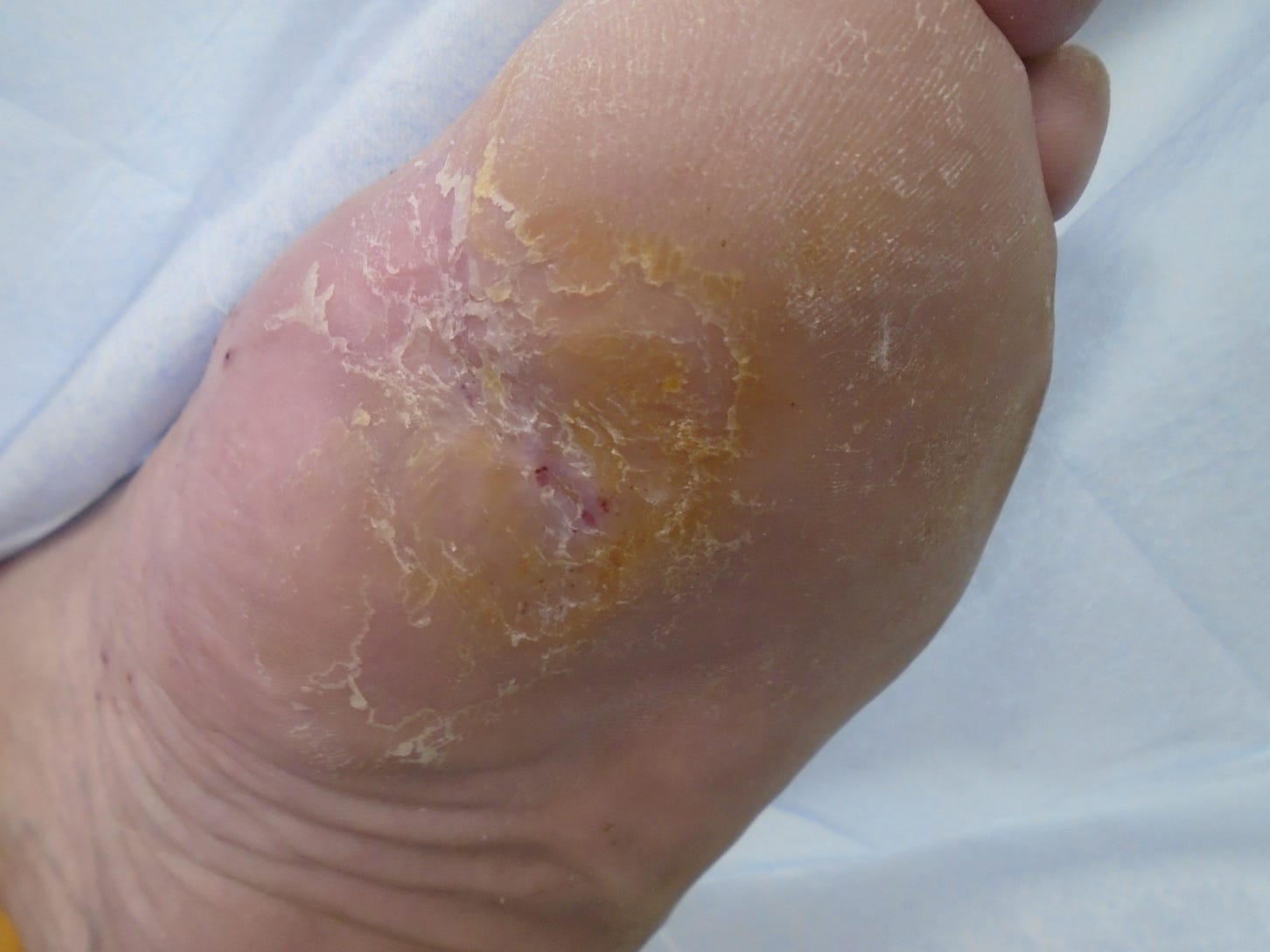 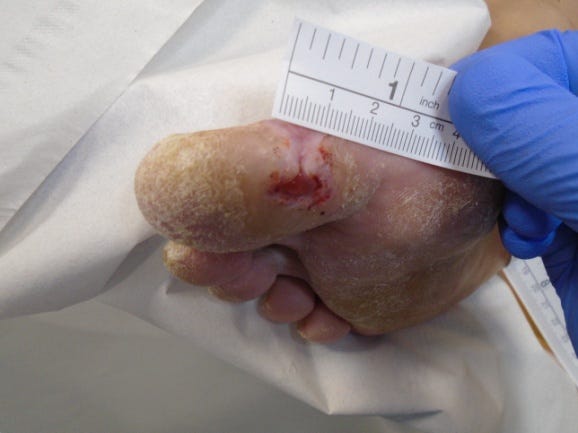 The second patient had a neuropathic ulcer on the plantar aspect of the right 1st toe which had been present for 4 months. The wound measured 1 x 0.5cm with 0.1cm depth and the ulcer had a history of infection which was resolved with antibiotics.

The patient worked as a playground supervisor at a primary school, which involved standing for long periods of time. She agreed to take time off her work to allow treatment with the cast. The TCC-EZ® device was used.

No complications were noted and within 48 hours the ulcer had decreased in size by 2mm. The patient was re-casted and within one week the ulcer was healed. A further 2 casts were applied to ensure full epithelialisation. 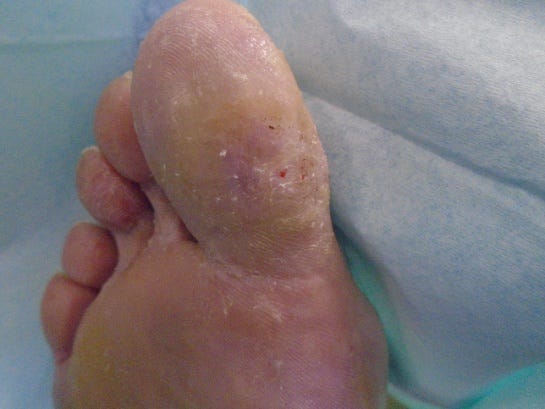 One week after casting with TCC-EZ®

All casting and setting times were recorded, with mean averages calculated.

At the end of their casting treatments, patients were asked to complete a questionnaire to provide feedback and evaluate their experience. Their main comments were as follows:

Both methods of casting significantly improved ulcer healing rates, however, no comparison is drawn of healing rates achieved as only 2 patients were studied. Although rubbing caused additional ulceration with the Traditional TCC, the bespoke design allowed the application of deflective felt to be applied underneath the cast successfully. No rubbing was noted with the TCC-EZ®.

Traditional TCC still works out cheaper, despite the saving on clinical time the TCC-EZ® gives. It should be noted, however, if a patient is not casted, healing will take longer and therefore be more expensive.

The choice of whether to use Traditional TCC or the TCC-EZ® will depend on clinical judgement, available resources and the skills of the clinician. Ideally if both methods were available, the choice would be determined by what would be best for the individual patient. If casting was done regularly, Traditional TCC would be the preferred cheaper option. If patients were casted infrequently, TCC-EZ® would be the easier method to apply. Both methods, however, have a valuable place in clinical practice, and are extremely effective for off-loading plantar ulceration. 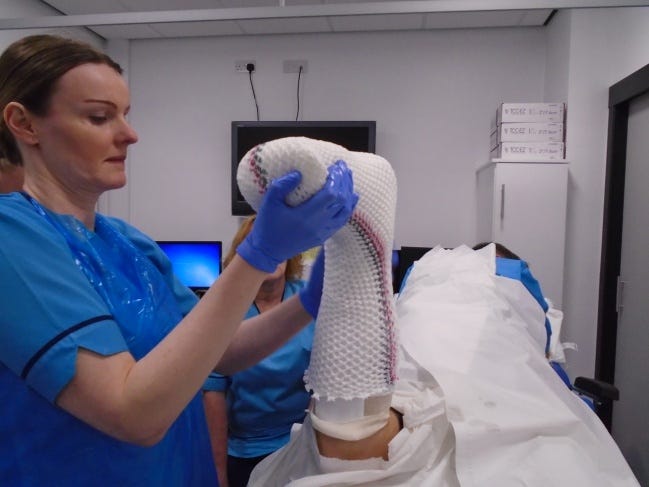 The purpose of this pilot study was is to examine the practical considerations of selecting which TCC method to use in clinic. With this in mind, formal ethical approval was not considered necessary. Patients gave written consent to be included, and for digital images to be held on record for teaching and publication purposes, in accordance with NHS Grampian guidelines.

Marie Stirling would like to acknowledge the support she received from plaster technicians, Glen Forsyth and Lorna Beattie, who were a great help throughout the project.