We’re pleased to announce that the winners of the Cosyfeet National Community Award are Priory Knit Wits, who are based in Whithorn.

Knitting for a host of good causes

Launched this year, the Cosyfeet Community Award offers a one-off donation of up to £500 to registered charities or not-for-profit organisations and clubs who are working on local projects within the UK that support and enrich the lives of older people.

We are pleased to announce that this year’s winner of the national award is Priory Knit Wits, a non-profit making organisation that has been in existence for almost 5 years.

Based in Whithorn, the group meets once a week for a chat, a cuppa and to knit! They have been knitting and crocheting for over four years for a host of good causes at home and abroad.

“We are mostly ladies, but we have four gentleman members, one knits and three do crochet. Our eldest knitter is 97 years,” says Mrs Elkin, the clubs secretary. “We knit, solely, to be able to donate to people in need. We’ve made and donated hundreds of blankets to the elderly in their homes as well as bed socks and knee blankets for our local nursing home.”

“I’m very proud of what our club has accomplished and are thrilled to bit to have won the award. When I told everyone there was a big clap! We intend to spend the money on wool which is getting expensive and which members have to pay for themselves often living on limited means themselves.” 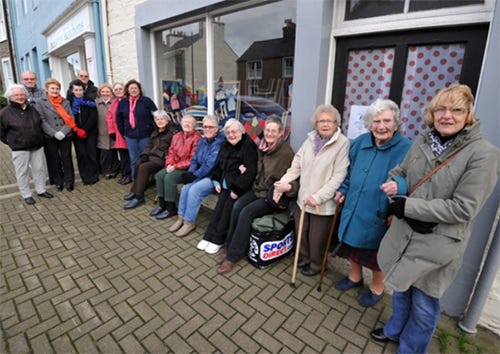 Some of the members of the Priory Knit Wits

Posted in Newsletter Articles , Cosyfeet Blog by Andrew Speed
Back to Community