Every year in the UK a third of people over 65 will fall. This rises to almost half in people aged 80 and above. Falls can cause broken bones, head trauma and other severe injuries while less serious falls can lower people's mobility and lead to other problems.

According to a new study, swimming may lower the risk of older adults falling. Researchers in Australia looked at 1,700 men aged 70 and above, and compared the types of exercise they did with their likelihood of experiencing a fall over a four-year period. There were nearly 2,700 falls during the study.

"Unlike land-based sports, swimmers are required to create their own base of support and at the same time, to produce a coordinated movement of both upper and lower extremities," said study author Dafna Merom, an associate professor of physical activity and health at the University of Western Sydney in Australia.

The researchers also found that the swimmers did better on a test of "postural sway," compared with the average of all men in the study. In this test of standing balance, a person is asked to stand as still as possible for 30 seconds, and researchers measure how much his or her body moves, at the waist level, from the centre position.

Although the study included only men, it is likely that swimming also lowers women's risk of falls, Merom said. "I would expect it will work even better for women, given that women generally have less muscle strength than men.” 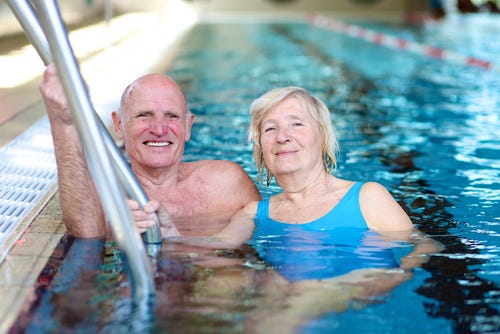