Is sitting the new smoking?

According to recent research, sitting for too long is bad for your health, even if you exercise regularly. Studies have linked excessive sitting with type 2 diabetes, some types of cancer and even premature death.

The link between illness and sitting first emerged in the 1950s, when researchers found London bus drivers were twice as likely to have heart attacks as their bus conductor colleagues.

Prolonged sitting is thought to slow the metabolism, which affects the body's ability to regulate blood sugar, blood pressure and break down body fat. It may even cause weaker muscles and bones.

Many people in the UK spend more than seven hours a day sitting or lying, and this typically increases with age. This includes watching TV, reading, sitting at a desk or driving but excludes sleeping.

One of the largest pieces of research – involving almost 800,000 people – found that, compared with those who sat the least, people who sat the longest had a:

What can we do to lessen the risks?

Experts advise breaking up long periods of sitting time with short bouts of activity for just one to two minutes. They recommend an “active break” from sitting every 30 minutes. This advice applies to everyone, even people who exercise regularly, because too much sitting is recognised as an independent risk factor for ill health.

Other tips to reduce your sitting time: 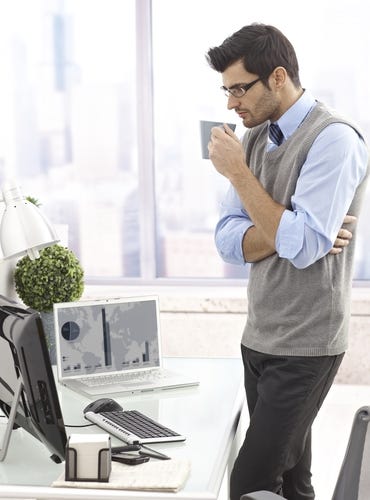